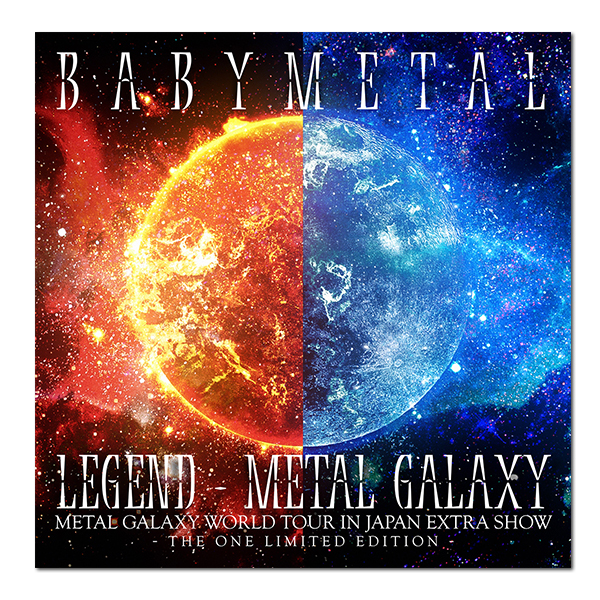 『LEGEND - METAL GALAXY』 - THE ONE LIMITED EDITION -(THE ONE members only)

Item number：90018771
* "GMO deferred payment" cannot be used to purchase this product. In addition, we cannot accept cancellations after the order is completed. Please be careful in advance.
Item Delivery Guide
THE ONE members-only Blu-ray "LEGEND --METAL GALAXY" --THE ONE LIMITED EDITION --Sales decision! !!

The full-length recording of the one-man live "METAL GALAXY WORLD TOUR IN JAPAN EXTRA SHOW LEGEND? METAL GALAXY" held at the Makuhari Messe International Exhibition Center in Chiba on January 25th (Sat) and 26th (Sun), 2020. BABYMETAL This performance, which became the first live in 2020, is based on the image of "Metal Galaxy Journey", which is also the theme of the 3rd album "METAL GALAXY" consisting of 2 CDs, and does not play the same song during the two-day performance. A live performance that takes on the new challenge of reproducing the album without any songs on the set list.
DAY-1 with the theme of "the world of light" and DAY-2 with the theme of "the world of darkness", and Blu-ray and CD are divided into two to express two days with different concepts. "LEGEND --METAL GALAXY" --THE ONE LIMITED EDITION-, which is the culmination of "METAL GALAXY WORLD TOUR", has been decided to be on sale!
This product is a special package that is limited to THE ONE members and is completely made-to-order and covers not only video but also sound sources, photographs, special interviews, and special goods.

[About product delivery]
For customers who apply for products within the following period, we plan to use it after September 9, 2020 (Wednesday).

▼ Order / payment deadline ▼
June 15, 2020 (Monday) 18: 00-July 5, 2020 (Sunday) 23:59
* This product is limited to THE ONE members.
* If you wish to purchase this product, please place an order during the above order period.
* Since this product is completely made-to-order and sold, the order deadline will be after 23:59 on Sunday, July 5, 2020, but there is a possibility that some will be sold after inventory adjustment due to inadequate application.

▼ Please be sure to read before applying ▼

★ If you apply with other products all the products will be shipped together once the product with the latest shipping date is in stock. Please be careful in advance.
★ We cannot accept any changes to the order details or cancellations due to customer's convenience after the order is confirmed.

Only one account per person can be registered on the THE ONE members site. Please refrain from registering multiple accounts.

This item is sold exclusively to BABYMETAL members site "THE ONE" members (T-Shirt purchase privilege). To purchase, you will need to register as a member on the "THE ONE" site in 2020, and the METAL name / password at the time of registration.
* Cannot be purchased by 2019 "THE ONE" members (T-Shirt purchase privilege). please note.
☆ This product is sold only to "THE ONE" members (you cannot apply for more than one).
Click the "Add to Cart" button to move to the member authentication screen. If you are a member, please enter your registered METAL name and password to add the product to your cart. You can purchase products other than those limited to WEB members at the same time.
* When entering the METAL name, enter up to "-METAL".