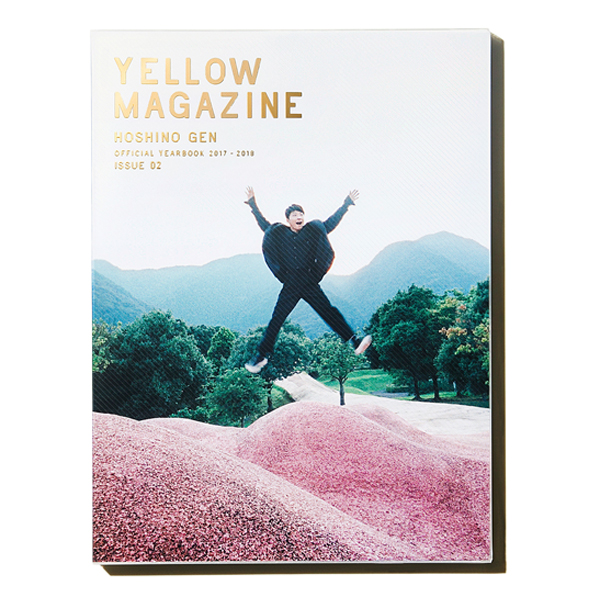 "YELLOW MAGAZINE" (YEARBOOK)
Hoshino Gen Including a long interview that he talked about in his own words, a super-luxury tripartite talk of Hoshino Gen x Haruomi Hosono x Tatsuro Yamashita was realized! In addition, following last year, the second photo story taken by Yoshiyuki Okuyama is included. In addition, there will be a dialogue project by video director Shota Yamagishi and constituent writer Naoki Terasaka, "two people who are as close as possible to Hoshino Gen talk", and the Galaxy Award, which was broadcast on NHK on May 4, 2017. A music journalist who talks about the transition from the single "Koi" to "Family Song", a special column by writer Makoto Tobeda (Telebi no Skima), who dissects "Ogen-san to Issho", which won the monthly award in May. Interview with Yoshiro Takahashi, thorough commentary on all songs of 3rd album "Stranger" with MUSICA editor Tomoko Arizumi, "Everyone's extremely private Hoshino Gen review" from a celebrity who knows Hoshino Gen well, etc. A super-luxurious book that captures the year 2017 of musician Hoshino Gen from various angles over 128 pages.

"YELLOW PASS" (WEB service)
A web service that can only be used by those who have purchased "YELLOW MAGAZINE 2017-2018". Hoshino Gen 's fastest live ticket advance reception (lottery) and application for TV program viewing will be possible, and as a "bonus", Hoshino Gen 's movie, photo gallery, etc. will be irregular on the site. You can enjoy limited content.
* The service is scheduled to start at 12:00 on March 26, 018.
* All of the above implementations and updates are irregular.
* There is no feature phone service.
* We do not guarantee the service for those who purchased from overseas.
* The expiration date of the service is scheduled for March 2019 regardless of the registration time.
[Inquiries about YELLOW PASS]
For inquiries regarding YELLOW PASS such as registration details, please contact the dedicated window directly.
https://yp.hoshinogen.com/mob/pageShw.php?site=YP&cd=faq
A!SMART cannot support at all.